At TRACT we support the implementation of community based eco-tourism in the buffer zone of Tadoba Andhari Tiger Reserve. Also known as the Tadoba model we encourage  participation of local communities living in these buffer villages in the Eco tourism in the Park.

Marginal farming and labour work has been the only options of employment for these communities living in these forest fringes. Riddled with unemployment, crop damage of the marginal farms by the wild herbivores, uncertain rain, poor yielding livestock and being fence sitters in the increasing tourism in the area, its is difficult to convince these communities to participate in conservation of wildlife and its habitat.

But building capacity of youth and women for the hospitality and tourism sector, has opened opportunities for employment as naturalists, guides, gypsy drivers, staff for hospitality, small enterprises, patrols and more. This sharing of financial benefits of eco tourism has ensured that locals take ownership of the well being of the wildlife and the forests, thus their participation in conservation.

Four areas in the Tadoba buffer zone have been converted to the Buffer eco-tourism zones and have been a big success. Communities in a given area are benefiting directly from these new areas. Employment has been generated through nature guides, safari drivers and gate operators not to mention in the area of accommodation and food hospitality. Profits generated are controlled and distributed back to the village people. This buffer tourism and benefits to local people has lead to the creation of a social fence, where by everyone in the community reeks the benefits and therefore work collectively to ensure the protection of the wildlife. Tigers which were once feared and hated have now become worshiped and protected by the local people along with their prey species.

Buffer tourist areas also have the potential to become more popular than the core zones, there is more freedom for tourists to interact with nature here. In the buffer areas people are permitted to walk so nature trails are of high popularity. These areas also reduce the tourism pressure on the core as tourists can now be more equally distributed throughout the area. Overall the Tadoba eco-tourism model is something we will continue to work with and support and it has great potential benefits for both people and wildlife in the region. For the first time ever in India people are calling for the expansion of a buffer zone to include more villages, so that they may also seek these benefits. ​ 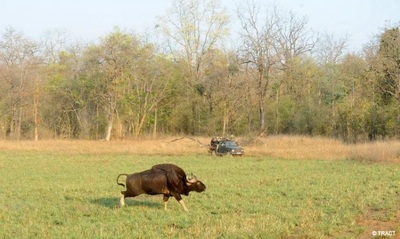 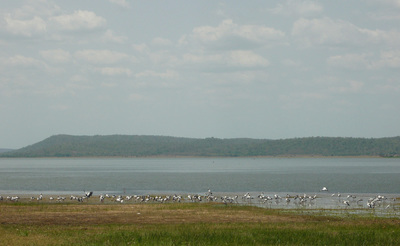 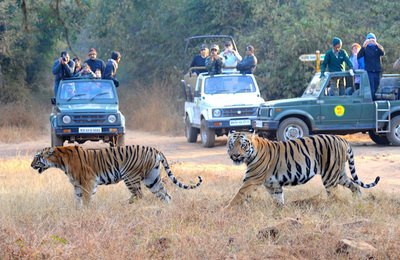 The Buffer zone is a matrix of forest area, villages, farmland, fallow fields, lakes and more. With close to 40% area in the buffer under forest cover and contiguous forest of the core, this buffer is home to a large wildlife population including large carnivores.

Marginal farming and livestock farming is the main source of income for local people in this area. However it is a difficult lifestyle, crops need constant guarding until their harvest to protect them from the threat of crop raiding by herbivores. They also rely heavily on a good monsoon for a good growth, and with each year it becomes more of a gamble. The maximum a farmer can obtain is two crops if he is lucky in one year, this has to then sustain the whole family until the following season. All the while cattle and other livestock regularly fall victim to predation by carnivores, not to mention the risk to human lives, especially cattle herders in the region.  Overall it is a difficult life to make ends meet, a constant battle with nature and wildlife to earn a living for your family.

An alternate option is to go with the flow, convert marginal poor yielding and fallow farms to forests without change of the owner.
Allow nature to regenerate, allow wildlife to prosper and flourish and most importantly allow the possibilities of creating revenue through tourism to take hold.

Poonam and Harsh Dhanwatey have converted their barren patch of land devoid of green into a lush forest in the buffer zone of Tadoba. Simply keeping cattle off the land and protecting the grass to remain, the years saw the parcel come back to life. A small water saucer which they call the Tiger Taka has been on this parcel since they owned it. And this has been a favourite watering hole for tigers, tigresses and cubs, leopards, packs of wild dogs, herbivores including chital, sambar, blue bulls. Sloth bears and wild boars are daily visitors.

TRACT works to promote this simple concept by encouraging communities to reduce their farming practices, and instead join their lands and allow nature to regenerate. Once wildlife begins to inhabit the area the conservancies can now become attractions for tourists which in turn brings revenue for local people.

Tadoba Andhari tiger reserve is world famous for its wildlife viewing yet only a handful of the local communities living in its buffer zones, forced into an uneasy tolerance, benefit from the swarms of tourists flocking to its gates each day. By creating tourism attractions such as nature trails, bird viewing and game drives in the buffer zone a community has the potential to create a booming business where by all profits directly descend back to local people. This concept is not only beneficial to these people but of course it brings numerous benefits to the wildlife. Not only are animals now provided with increased habitats but they also become of value to the local communities who will work to ensure their protection. Overall the conservancy concept is a win win situation for all stakeholders involved. 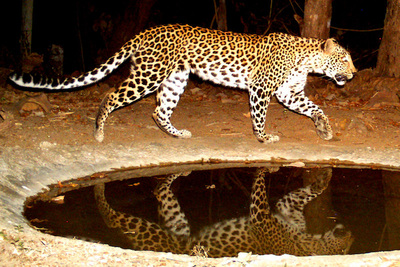 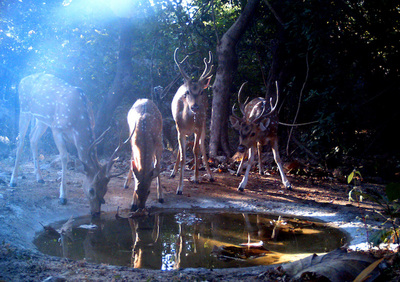 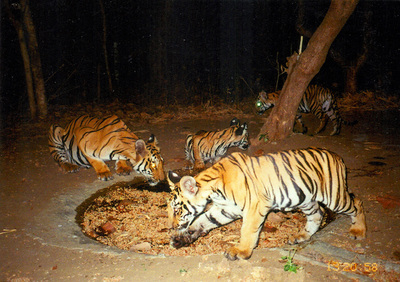